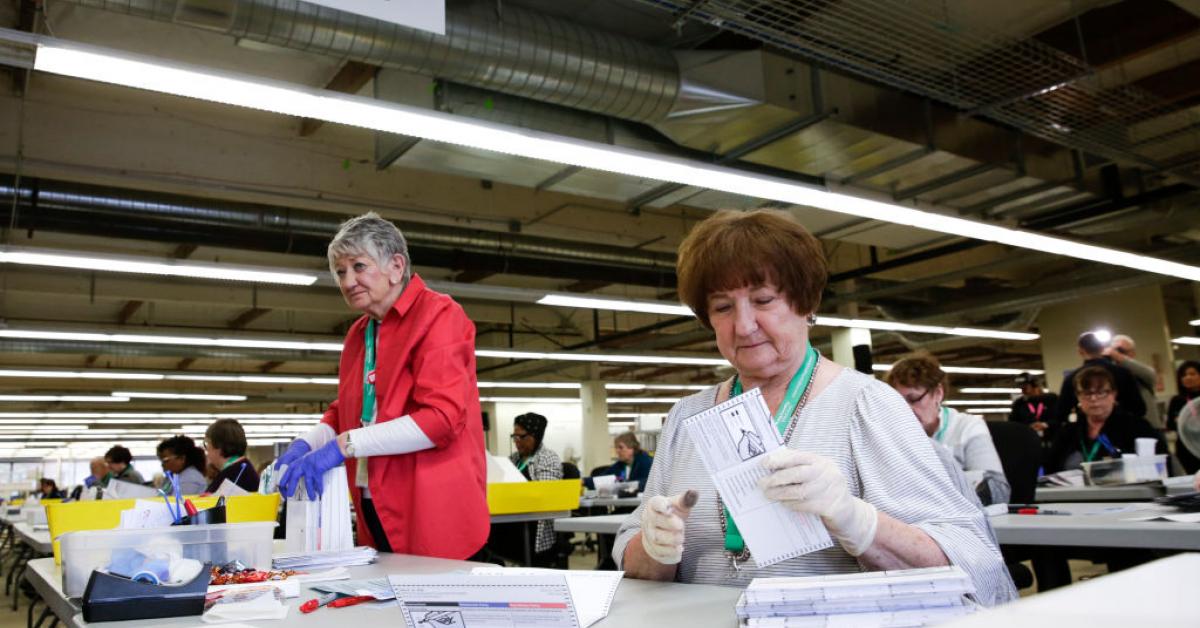 The Center for Tech and Civic Life's donations to blue strongholds are attracting increased attention, controversy.

Joe Biden, or more accurately, Lawfare Marxists, cheated to steal the election from President Trump. Even one third of democrats admit this truth.


The latest evidence from Rasmussen Reports:

In Arizona, President Trump defeated Joe Biden by whopping margins, but Democrats (using various schemes) rigged the vote and stole it. Now, they’re desperate to stop the crime from being exposed.

A former Trump campaign data analyst who raised hundreds of thousands of dollars in the wake of the election to examine the results, has proven that tens of thousands of votes in key battleground states like Arizona and Pennsylvania were cast with fake addresses – but the Democrats don’t want to know. But if one man in Florida can do it, who else might have done it, too?

One of the lawyers who fought, without a lot of success, to have evidence of fraud in the 2020 presidential election reviewed by the courts in America has delivered a harsh verdict on the state of the nation under President Joe Biden.

Here's how you know Democrats rigged and stole the 2020 election

The fix is in. It's crystal clear to me now that not only was the election rigged but so is everything post-election. It's simple psychology. Just look at the absurd reaction, or overreaction, by Democrats.

[NOTE: This is the full text of a column by Wayne Allyn Root, dated 12:01 a.m. on May 9. It was linked to in the previous post, but I'm reprinting the full text for easier reading.]

Let me put this in terms even Democrats can understand.

Let's say a white police officer killed a black man who did nothing wrong. Unlike George Floyd, this man had not committed any crime, did not resist arrest, didn't have fentanyl in his system and had no record of violent crime. Assume this poor guy was a law-abiding, taxpaying, churchgoing American and that the cop killed him for the crime of "driving while black."

What would all of that mean to you? Guilty as charged, right? The police must be covering up a crime. No one who's innocent acts like that, right?

Guess what? That's equivalent to the reaction (or, should I say, overreaction) of liberals, Democrats and assorted socialists and communists when Republicans make accusations of massive voter fraud in the 2020 presidential election.

The fix is in. It's crystal clear to me now that not only was the election rigged but so is everything post-election. It's simple psychology. Just look at the absurd reaction, or overreaction, by Democrats.

Would anyone dare ban the right to discuss a possibly racist police killing? Can you imagine the reaction by liberals, black activists and the American Civil Liberties Union? What if the Minneapolis police were to permanently ban any discussion of George Floyd's death? What if every black American trying to give his or her opinion on Twitter, Facebook or YouTube were banned for life?

Here are the questions I want answered.

* If Democrats didn't rig and steal the election, why are they so afraid of forensic audits in key battleground states, specifically the current audit in Arizona?

* When Trump was an 8-to-1 landslide favorite with bettors around the world late on election night and clearly headed toward a landslide electoral victory, why did five states suddenly announce they would pause counting for the night? And how come Biden was suddenly ahead by morning?

* How come Philadelphia vote counters were so desperate to keep witnesses out of the counting room? Why did they refuse entry to witnesses (to Republicans) until those witnesses had a court order in hand?

* Why were the windows in a vote-counting location in Detroit covered with cardboard so nobody (no Republican) could see inside?

* There are videotapes filmed in Detroit of vans pulling up in the middle of the night with what obviously look like boxes of ballots. In Atlanta, there are videotapes that clearly show ballot containers appearing at a vote-counting location after a fake water main break was used to force all GOP witnesses out of the counting room. Why can't we discuss these videotapes?

* How come Twitter banned me for life over mentioning these videotapes?

* How come the Arizona Senate's liaison for the vote audit says Maricopa County hasn't complied with the subpoena by turning over passwords to Dominion voting machines?

* How come the Biden DOJ suddenly wants to stop the Arizona audit?

These are all valid questions. Why do we get backlash for asking them and posting them on social media? What are Democrats hiding? What are they so afraid of?

In the end, that's the proof Democrats rigged and stole the 2020 presidential election. The truth is in their ridiculous, heavy-handed overreaction. They're desperate to stop you from looking into or even talking about this.

Democrats are guilty as sin.

and the SCOTUS won't touch it with a 10' noodle.

The column by Wayne Allyn Root begins with the statement ...

Let me put this in terms even Democrats can understand.

... but even if they would (or could) understand what the column stated, most all liberals and Democrats would never admit it, and of course, the fake-news lamestream media will never report things that don't fit their far-left "narrative."
You must log in or register to reply here.
Share:
Facebook Twitter Reddit Pinterest Tumblr WhatsApp Email Link
Top